Pedestrian Accidents
Facts and Stats
What to Do
Other
Q&A

Every year, a needless number of pedestrians are hit or even killed because of motorist’s negligent or irresponsible actions. Pedestrian accidents may increase especially during the holidays, or in the dark evening hours, when people rush back to their homes after a stressful day.

Pedestrian accidents increase when drivers drive recklessly under the influence of drugs and alcohol. Impaired drivers fail to act responsibly and fail to pay the needed attention towards sidewalks and crosswalks.

Texting while driving is another common reason for pedestrian accidents in Las Vegas.

Though the possibilities of an accident vary with surroundings and community environments, some areas are considered prone to accidents. Boulder Highway is infamous for pedestrian accidents. 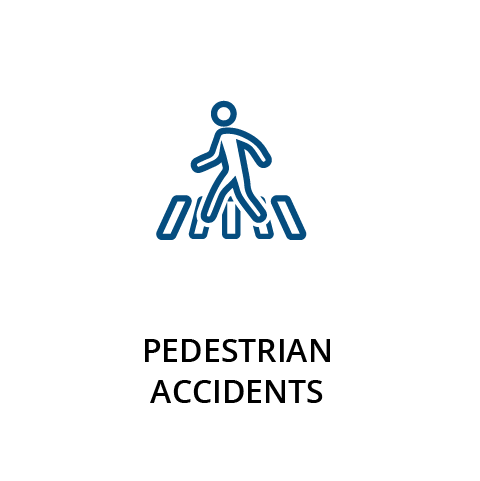 Some Interesting Facts and Statistics

Catastrophic Personal Injuries After Being Hit by a Car

A pedestrian who is hit by a car could sustain serious or catastrophic personal injuries, even at low speeds. This is because pedestrians do not have an airbag, seatbelt, or other protective equipment around them like other motorists. Pedestrians also do not have a helmet like motorcyclists or bicyclists. As a result, pedestrians are more likely to be seriously injured when being hit by a car. Some of these traumatic injuries include traumatic brain injuries (TBIs) and spinal cord injuries (SCIs).

The CDC defines a traumatic brain injury (TBI) as “a disruption in the normal function of the brain that can be caused by a bump, blow, or jolt to the head, or penetrating head injury.” The most common types of TBIs after a pedestrian knockdown include the following:
Spinal Cord Injuries

What Should a Pedestrian Do After Getting Hit by a Car?

Needless to say, examining one’s own body and then checking valuables like phone, wallet, cards, etc would be anyone’s priority after getting hit by a car, but there is more you should do.

Though it might seem OK for you at the first glance, expert advice and proper medical help are highly recommended after a pedestrian accident. There might be some unnoticed wounds or head injury that needs to be paid attention to, so getting medical help right away is the first thing you must do.
Contact the Police

You should immediately call the police to file a report and complete the necessary formalities. Make sure you record your statement with the police department carefully, as it is going to impact you in the future for both potential criminal proceedings and a personal injury claim.
Record Details and Take Photographs or Video

If a witness is present, take their contact information. Take photographs of the scene, the vehicle involved, and your injuries.
Contact a Pedestrian Accident Attorney

You should hire a professional and experienced lawyer who will work on a contingency fee to assist you in obtaining the full justice and compensation that you deserve. To make your strongest case, your pedestrian accident attorney will need to start working on gathering evidence, photographs, statements, and investigate as soon as possible.

Legal Consequences when a Pedestrian is Hit by a Car

Crashing your car into a pedestrian can lead you to dire consequences. If you hit a pedestrian, even if he is at fault, a poorly-held case can lead you to significant criminal charges – you can lose your driving license or have to pay heavy fines or compensations. If the pedestrian gets killed in the accident, it can put you behind the bars under manslaughter charges. If you stop at the accident spot, report the accident yourself, and help the victim, the criminal charges can be dropped.

You may also be sued civilly on top of the criminal charges for the injuries or death of the pedestrian.

Pedestrian Accident Outside of a Crosswalk

Jaywalkers, who cross the roads diagonally, or who walk outside of a crosswalk, are considered as offenders or traffic rule violators under the state’s law.

The vehicle owners reserve the right-of-way while a pedestrian crosses a road out of the crosswalk, and in such a case the pedestrian can be held partially or fully responsible for the accident.

But as stated earlier, every case varies according to the facts of the accident, surroundings, and how the case has been reported.

Many times, drivers are held liable as they are expected to act responsibly, pay full attention, and act swiftly according to the environment.

Even if there is a clear case of pedestrians’ carelessness or a jaywalking incident involved, the seriousness of injuries can place the motorists liable for damages.

If you are not sure about the case, contact a pedestrian accident attorney to understand who is to be held liable.

What Happens When a Car Collides with a Pedestrian?

An accident, big or small, always is a terrifying experience and even a slow-moving car can lead to lethal injuries. When a car hits a pedestrian, three factors decide the consequences. The initial impact – how the car touches the body & at what speed, the trajectory – how the pedestrian takes the blow, and the ground contact – and how the pedestrian’s body hits the ground after the accident. These three factors collectively determine the gravity of the situation.
Who Is To Blame For These Fatalities? Pedestrians Or Drivers?

The answer may vary according to the circumstances, but there are two common cases – careless pedestrians who fail to abide by the crossing rules, and the drivers who are not responsible enough behind the wheels.In some cases, pedestrians are found negligent and when they are careless to their surroundings; distraction caused by smartphones or jaywalking rather than following pedestrian customs may lead them to fatal accidents.On the other hand, texting while driving, driving under the influence, speeding, or other kinds of distractions can put drivers at fault.
Crosswalk Accidents: Who is at Fault?

Careless pedestrians can also be held responsible for carelessly crossing the road, but in the case of crosswalk accidents, drivers are usually considered to be liable.

The law states that pedestrians should be careful and pay attention to their surroundings even when they pass by a crosswalk. Running or suddenly moving into the car’s way is not suggested. Entering a crosswalk during the “Don’t Walk” signal is considered illegal.

Even if a pedestrian starts walking while the “Wait” signal flashes, it was against the rules.

Crossing during the countdown would not be considered a traffic violation.
Could the Pedestrian Be at Fault for a Car Accident?

Some common violations like:
…among other distractions, especially outside of crosswalks can make a pedestrian partly or fully responsible for an accident.

Thank you! Your submission has been received!
Oops! Something went wrong while submitting the form.

Visit and Call Us