The skull, layers of membranes, and extra padding keep the brain protected from trauma. Even having this natural shield, many incidents occur that cause traumatic brain injuries such as bumps, blows, jolts, accidents, and falls.

Such injuries can affect people in an unpredictable number of ways: from a simple bruise to emotional disturbances, depression, cognitive impairment, loss of memory, personality changes, and many other symptoms.

In these cases, it is important to contact a brain injury attorney.

Usually, people avoid lawsuits because they can be long and stressful, however, having the right personal injury lawyer by your side can provide relief for everything you go through while making sure you get the fullest justice and compensation. A brain injury attorney may be the first step to getting back on track. 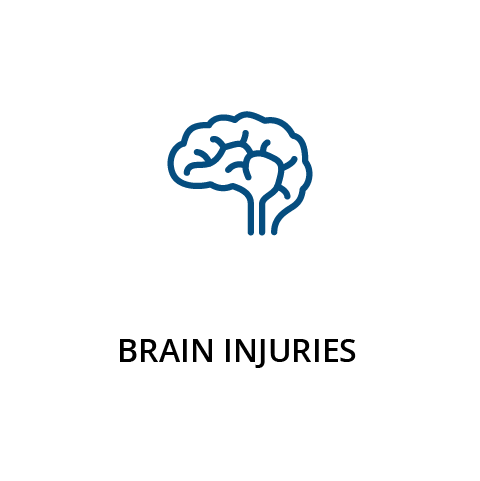 Some violent acts lead to brain injuries such as assault, domestic violence, gunshot wounds, child abuse, etc. Even violent shaking of a baby may lead to traumatic brain injury.

Types of Brain Injuries that Occur from Accidents and Falls

When a person receives trauma to the head and as a result receives damage to the brain, this would typically be categorized as a traumatic brain injury. It alters the brain functions or external force that may lead to brain pathology. Such injuries may be open (penetrating) or closed (non-penetrating). Common causes are assaults, motor vehicle crashes, and falls. The effects can be vast and long-lasting depending on several factors such as location, type, and severity of the injury.
Non-Traumatic Brain Injury

Some of the most common types of brain injuries include the following:

One of the most catastrophic types of brain injuries is a diffuse axonal injury, or DAI.  This type of TBI occurs when a violent force to the head or body causes sheering or ripping of tissue inside the brain.  The tissue that is torn is typically the axons and nerve connections, including in the corpus callosum which is the part of the brain that connects the two hemispheres.  Severe DAIs can result in a coma that a person may not be able to come out of.

Like coup-contrecoup TBIs, brain bleeds can increase the intracranial pressure to a dangerous level.  In addition to this, the blood itself can become toxic to brain tissue and cause chemical damage to it.  This means that a brain bleed could damage brain tissue in multiple ways.

Victims could suffer a penetrating brain injury when foreign debris piercing their head.  While the skull is very strong, it is not impenetrable.  Damage can be disabling and catastrophic, many times fatal.  Penetrating brain injuries could be caused by debris being launched into a victim’s head during like during a collision, or they could be caused when a victim’s head hits an object in a collision or fall.

Other Types of Brain Injuries

While these are the most common and devastating types of brain injuries, there are many other possible types of TBIs that could be caused including the following:

Stats and Facts of Brain Injuries

General Anatomy of the Brain

The brain consists of three main parts: (1) the cerebrum, (2) the brainstem, and (3) the cerebellum.

Cerebellum: The cerebellum is in the back of the head and tucked beneath the cerebrum. This functions to coordinate voluntary muscle movement and maintain posture, balance, coordination, and equilibrium.

Subparts of the brain include:

Located near the cerebellum and above the spinal cord. The pons is responsible for eye and face movements.
Medulla Oblongata

Makes the lower part of the brain stem. It is cone shaped and is arguably the most vital part of the brain, controlling the involuntary and automatic movement of the heart and lungs.
Spinal Cords

Starts from the base of the brain down to the lower back and is responsible for carrying messages to and from the brain and connects to the rest of the body. The spinal cord is the pathway for messages sent by the brain to the body and from the body to the brain.
Frontal Lobe

This the front area of the cerebrum and located near your forehead. It is responsible for important cognitive skills such as emotional expression, logic, memory, language, judgment, and sexual behavior. It also involves personality characteristics and movement. This is the largest of the major lobes. These are also the most common region of traumatic brain injuries.
Parietal Lobe

The middle area of the brain. One of the major lobes. This interprets pain and touch as well as helping a person identify spatial relationships with other objects through sight, touch, taste, temperature.
Occipital Lobe

Located in the back of the brain and is primarily responsible for being the visual processing center of the brain.
Temporal Lobe

Located on the sides of your brain. Your “temples.” These are responsible for short and long-term memory, speech, rhythm, and smell.

A brain injury attorney will help secure financial compensation for the harms and losses related to your brain injury. Compensatory damages for harms and losses from an accident are usually economic, non-economic damages, or punitive damages in some cases. A person may file a lawsuit for the negligent actions of others causing damage to the brain. Some damages that may be recovered include:
What should I do after a traumatic brain injury?

Traumatic brain injuries may require emergency care. The severity and type of problem can explain what sort of treatment you require at a moment’s notice. Once you get a traumatic brain injury then your work relies on rushing to a doctor who can diagnose your symptoms and help you obtain relief.

When a brain is injured, the ability of a person to perform varied tasks may be affected. Folks with traumatic brain injuries may complain about the inability to memorize things or people. A concussion may become a reason for long-term memory loss too. As per the studies, the IQ level of people who suffered from brain injuries may be affected considerably. Symptoms vary and may include:
Can a Brain Injury Change a person’s behavior?

Unfortunately, yes. Brain injuries cause emotional as well as behavioral changes that lead to a worse situation. You may even notice instant changes in behavior following the brain injury of another. The brain controls all our activities and directs the way we feel and act. Once the brain gets injured then changes in behavior and emotions eventually affect the working and actions of a person. It becomes a distressing situation for not just the person himself but also for the family. Some behavioral changes are:
However, these symptoms may be dealt with through early diagnosis and resorting to brain therapies, rehabilitation training, and other treatment.
Is it dangerous to sleep with a concussion?

Usually, in a suspected concussion, patients are warned to avoid sleep and to stay awake. Always listen to your doctor and follow concussion protocol.

If you are noticing some symptoms then you may want to avoid sleeping until you meet a healthcare provider and have a discussion with a doctor.

Thank you! Your submission has been received!
Oops! Something went wrong while submitting the form.

Visit and Call Us